Ruary is currently represented in the UK by Heart of the Tribe Gallery in Glastonbury. An extensive solo exhibition is scheduled for late April and May 2121. HOTT is a contemporary gallery showcasing provocative local artists in a variety of styles and mediums. 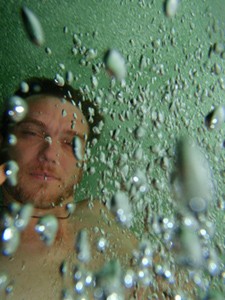 Ruary Allan is originally from Edinburgh, Scotland where he talked to “invisible” friends and rode small dinosaurs. From an early age he listened to Mike Oldfield and prog rock so much that he almost forgot puberty. He spent an entire summer on an exchange trip to Middle Earth and then got into Dungeons and Dragons which was really cool cause they had all the Platonic solids for dice. He also joined The Boy Scouts, a secret society founded to see how much blood could be removed from the bodies of children by midges. Ruary received an education, apparently, as the University of St. Andrews awarded him a degree in geology, much to his surprise. This led to a year mud-logging on North Sea oil rigs, which evoked for him gigantic mosquitoes, draining the very blood of the Earth.

For much of the 90s he lived Oakland (Oaksterdam), California where he got radical, went to Burning Man a lot and continued working with dirt and pollution. He also brought oil paint into his mix of materials, enjoying publication of his art and some good shows with some notable artists. After a spell living in a cookie factory prone to very large parties, there was five quasi-exotic years in Tokyo, one rather bad one in Barcelona and extensive adventure travel on the cheap before he came back to UK (or Blighty as he still likes to call it) in 2013. He found a relatively soft landing in Glastonbury (the town not the festival) which is not more strange than anywhere else he’s been.

Inspired by nature and psychedelic culture, Ruary has been inexorably drawn to express his inner vision. He didn’t know he could do it. His visual pilgrimage focuses on the use of colour, chaos and spatiality to recreate worlds of the imagination, symbolic mindscapes mediated by free association. His work has appeared in various galleries and juried art festivals in the US, Japan, Thailand and Europe, on CD covers, in alternative magazines and on too many party flyers to count. Ruary is currently represented by Heart of the Tribe Gallery in Glastonbury.

While backpacking Ruary focused on photography and writing, evoking the beautiful, ridiculous and harrowing experiences that travel can bring, in hommage to our disappearing heritage. Ruary would like give thanks to all of you who have encouraged him and walked with him along the path to this moment and especially to thank himself for gradually devising an artist’s statement page he can live with. Perhaps the greatest task of all.

Art is absurdly serious fun. It takes spontaneous craft and arduous play. Mind goes out through the senses, regarding and regaining nature in a mirror of vapour. Art is the condensation you can write your name in. Alchemy is the creative process that imbues the materials with intention. Artworks are magical objects. The artist collapses wave functions of potential data which are reasserted in the observer. Mind is redistributed to bring cognition of a common condition and to reveal new depths on the horizon.

Q’s: What kind of painting do you do?  How long does it take you to do one? Why do you paint?

A’s: It’s a process of mind mediated by pigment

It’s an elaboration of textural aesthetics

It’s harmonisation of hue by any means neccessary

Its freeing the light trapped in paint tubes

An iconoclastic melange of appropriated culture

It’s propaganda for the psychedelic revolution

It’s an expression of precious moments

It’s a recapitulation of psychic damage

It’s a catalyst, a catharsis

A broken manifesto of natural spirituality

It’s a prolonged lapse of reason

Posing as a portal to possibility

It’s a eulogy for the impossible

It’s what happens when you let go

It’s an attack on the church, the state and historical lies

It’s a reportage of transpersonal space (news from the noosphere)

It’s the power of the unknown

It’s a resurgence of the archaic

It’s a call for alliance

It’s a cry for survival